Online Calculation of the Tax Code 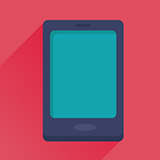 To calculate a tax code you need to enter the personal details in the appropriate fields and click on CALCULATE .

Once you have calculated the tax code you can click on COPY to copy it and use it as you wish. 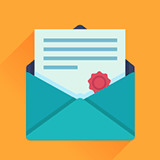 By clicking on the button LINK you can extract the link of the tax code just calculated to share with whoever you want.

Questions and answersUseful information on the tax code

What is the Tax Code?

The tax code, as is evident from the name itself is nothing but a code consisting of letters and numbers that allows to uniquely identify from the fiscal point of view all citizens, the non-recognized associations, taxpayers and foreigners nationalized in Italy that is born or domiciled in Italy. Basically it is a real registry introduced by the Minister Visentini in 1973. In the early years of the application was issued by the Inland Revenue a paper card. Subsequently, the paper support was replaced with a more sturdy plastic and, therefore, easier to maintain over time. The plastic card has a magnetic strip on the back that allows you to read and transfer data by swiping in special digital readers

What happens in cases of omocodia?

Although the algorithm used for the allocation of the tax code is sophisticated and complex, there is always the possibility of 'omocodie' that could create problems nell'univoca identifying the parties. In these cases through a particular mechanism it is possible to manage up to a maximum of 128 different codes of subjects omocodici. To take a simple example, just think of the fact that the last two digits of the year of birth, on equal terms with other data, for those born after one century give the same tax code. For example, a man born on 02/10/1907 has the same code of a man born on 02/10/2007. In cases of omocodia the Inland Revenue shall systematically replace only numeric characters with a letter.

Attribution of the Tax Code

How to claim the Tax Code?

The generation of the tax code, the production and delivery of the card remain in care of the Revenue and no external entity, except Sogei - Company general computing Spa - is authorized to produce software programs for the calculation of the tax code much less to print the relevant card. The city lacks the tax code can request it at any office of the Revenue, using the AA4/8. The request for allocation must be specified correctly general demographic and fiscal address, at which the card will be delivered with an indication of the tax code assigned. Along with the request, the Italian citizen or belonging to a State of the European Union must show proof of identity valid. For minors, the request is made by the parent who presents his identification.

What happens in the event of a change of name, surname or errors in the Tax Code?

Taxpayers who change their last name or the name during life are forced to update the tax code. The problem, which was originally occasional, is becoming more common with the increase in the number of immigrants: many, obtaining Italian citizenship, are forced to change the name because the rules of attribution of the Italian surname are different to their country of origin. We see two examples: the citizens of South American nations acquire at birth the double surname of the father and mother, losing it when they become Italian citizens; Romanian towns take their husband's surname when they get married and can lose when they divorce. In case of incorrect data on the plastic card of the tax code, it must be requested replacement in any office of the Revenue, by showing a valid ID.

How to apply for a duplicate?

If the tax code card is lost or stolen, or damaged or illegible you can request a duplicate. Application allows you to request a duplicate indicating the tax code or the complete personal data. For security reasons you are asked to indicate also some data on the tax return filed in the previous year. Citizens living abroad can get a duplicate addressing the Italian Consulate in the country of residence. It should be noted that the tax code of an individual reveals the date of birth and place of birth, information is not strictly necessary to the tax treatment that the subject is forced to reveal. None of this data is however sensitive data.

Some ScreenshotsHere are some screenshots of our portal 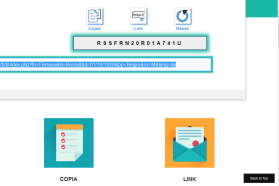 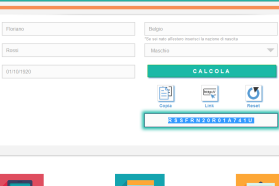 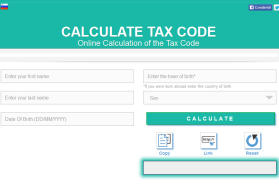 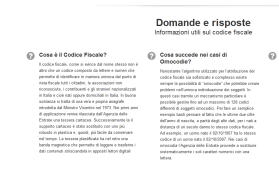 The calculation of the tax code is carried out according to the guidelines issued by the Ministry of Finance with the Ministerial Decree of 23 December 1976 and takes into account all the new Italian municipalities established in 2015. The tax code official shall only be issued by the Inland Revenue.

With the introduction of the Health Card, the Tax Code has been integrated into the health insurance card itself. The tax code is the official one issued by the Revenue and must always be available outside the home in order to be recognized, together with a valid ID.